Some lovely snapshots up on eBay, most probably from the scrapbook of a young woman who was a waitress at Silver Bay.

And I’ll bet that’s her in the center.

And this one captioned, “Seeing the delleys off” 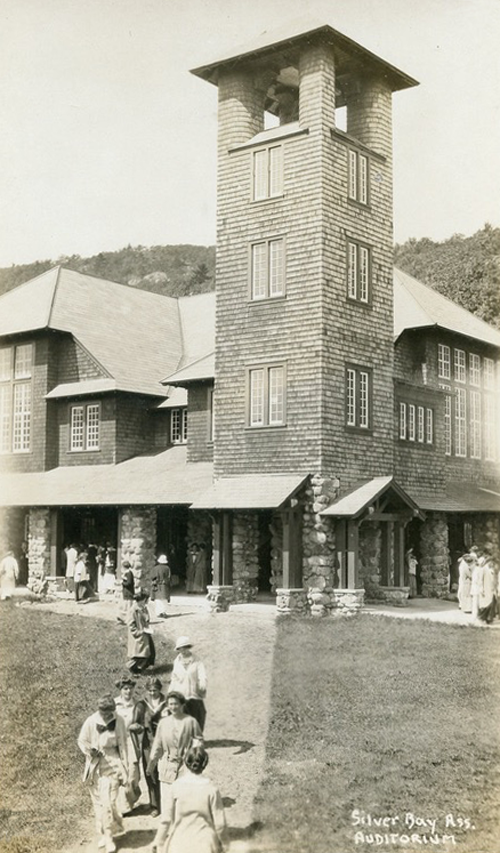 “My dear Ida, You know we only have just so many postals here. I can not remember which ones I have sent you but if you let me know what ones you have I will send the ones you haven’t.” 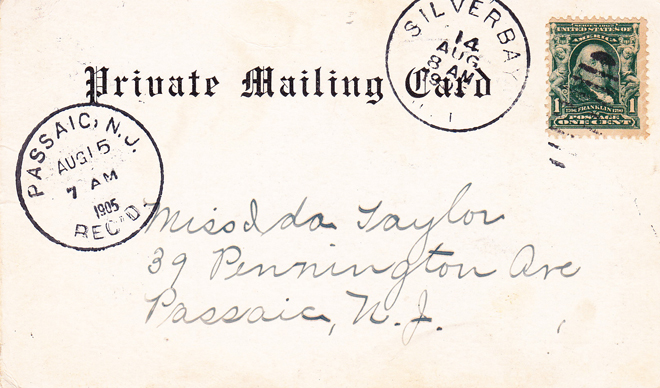 On the back of this postcard, on June 28, 1942, Betty writes, “My girl friend and I are taking a rest for ourselves here. This is the most beautiful place I have ever seen. Will write you all about it I get back. ‘X’ is where our room is.”

In 1937, after the death of Mary Paine, widow of Silas Paine, the Silver Bay Association was unable to buy her land, and it was bought by Mortimer Bowen who established the Sunrise Mountain Bible Conference on the grounds in 1939.

“Though by some accounts, Mort Bowen was a personable and friendly man, mention of his name usually raises eyebrow, if not hackles, among those who remember. For some it was the robust brand of faith and worship practiced at the Bible camp. For others it was the desecration of Mary Paine’s beautiful estate… To accommodate the Bible conference guests, Bowen made alterations to Paine Hall, turning some rooms into dormitories and adding a large rotunda dining area, in the process destroying the formal garden behind the house. The chicken coop was converted into guest rooms, and additional space was provided at the old farmhouse across the way and the former Braisted hotel down the road. A large hall, the Tabernacle, was constructed on the site of the present archery range.

“Neighbors recall the joyful singing at the camp meetings and the baptismal services in the nearby shallow water of the bay. Whatever the saints of the earlier generation might have thought of it, Van Buren Bay residents of the 1940’s were not kind and did not welcome this new and different expression of religious enthusiasm. Two juvenile delinquents are even known to have vandalized the property, changing the birch twig-work sign at the top of the hill from ‘Sunrise Mountain Bible Conference’ to ‘Sin Mounts in Bible Conference.’

“Mortimer Bowen faced more serious problems when the Braisted hotel burned in 1945… There may have been other difficulties or the endeavor simply ran its course, but in time the Bible camp closed… In 1958, the Silver Bay Association acquired Paine Hall and most of the property on the point… eventually the [Tabernacle] building was razed.”

Patriotic Day, Friday, August 12, 1910, saw representatives of 17 nations attending the YMCA’s conference of Christian Workers, here lined up in front of Silas Paine’s museum, today’s Morse Hall. I have no idea about the slips of paper they are holding, or the young girl who is reviewing them.