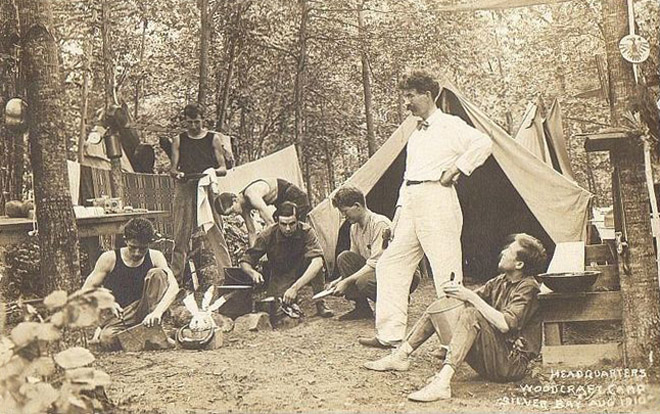 The gentleman in the white shirt is Ernest Thompson Seton (1860-1946); he founded the Woodcraft Indians in 1902, and was instrumental in founding the Boy Scouts of America with Dan Beard and Lord Baden-Powell. Here we see him in the Woodcraft camp at the first Boy Scout gathering in America, held at Silver Bay in August of 1910. Seton was the first Chief Scout, and liked to be called Black Wolf. He was an important influence in scouting, emphasizing the lore of the native American and the importance of the animals of the forest. He eventually differed with other scout leaders, who objected to his British citizenship, his wife’s activities on behalf of women’s suffrage, and his lack of enthusiasm for a more militaristic vision of Scouting. By 1915, he was gone from Scouting, but continued to write books about nature, woodcraft and animals for the rest of his life.