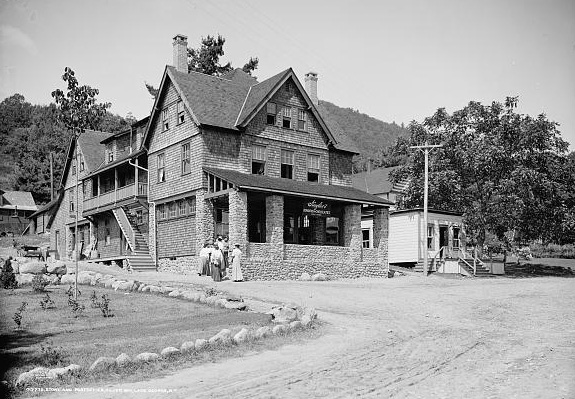 Silver Bay’s first postmaster was John J. Wilson, who in 1885 bought the property that would become the campus of the Silver Bay Association. He built a summer hotel, the Wilson House at Brookdale Farm, and in 1889 was formally appointed its postmaster, a position he filled for nine years before selling his hotel property to Silas Paine and moving on.

James Adams was appointed postmaster in 1898 and built a small one-room post office in front of his house, shown in the two photos above. Adams shared his postal duties with his wife, Annie Bartlett Adams, and his daughters, Mary and Huldah. 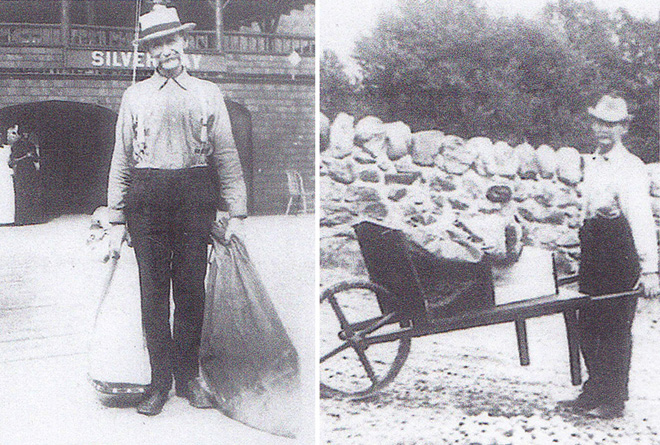 James carried the mail in a wheelbarrow to and from the steamboat dock (today’s ERC), and in the summer the post office was a buzzing social center for YWCA and YMCA conference attendees as postcards, letters and parcels came and went.

After her husband’s death in 1915, Annie B. Adams continued to serve and was formally appointed postmaster in January of 1916. She held the job until 1923 when she retired and was replaced by Helen M. Braisted. According to one account, the Silver Bay Association wanted one of their own employees, Louis Spelman, to take the position; when Helen Braisted was appointed, the directors pouted, sulked, and then decreed the post office be moved off the Association’s property. In 1924, in accordance with their wishes, the little one-room post office was torn down.

I’ve long been interested in the Adams’ youngest, Huldah, seated on the porch in the photo above, with her hand held oddly in her lap. What was her malady and what became of her? Huldah Ellen Adams went to Cornell University on a New York State scholarship, graduated Phi Beta Kappa with the Class of ’17, and moved to New York City where she worked as a librarian at the Biblical Seminary (today’s New York Theological Seminary). The school’s founder and president was Dr. Wilford W. White, who had long been associated with the YMCA and Silver Bay Association; I would guess he had known Huldah since she was a young girl. Huldah Adams died in 1930, just three years after her mother’s death. The earthly remains of James, Annie and Huldah are buried together in the family plot in Hague.

Postcard images: Top and bottom, the Store and Post Office by the Detroit Publishing Co., the original black & white photo and the tinted version; all other photos by Jesse Sumner Wooley.