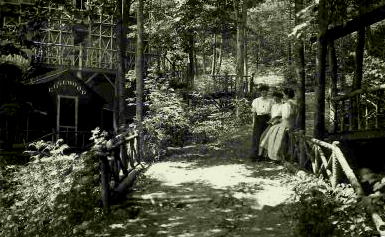 “I was late to delegation meeting and was stumbling along the road in the fragrant darkness near Forest Inn, but suddenly I came to a turn in the road into which stole threads of music from all sides. With one hand on a cool tree trunk, I stood quite still for a moment. Down the hill at my left, I could see the faint glimmer of white dresses on the steps of a cottage. They were singing ever so softly but the tenor rose true and sweet above the rest. “Night is drawing nigh,” you know those four climbing notes. Back of me in the depths of the woods I could hear a broken fragment of “Savior, breathe an evening blessing.” Far down the hill from the boathouse came just a breath of music. I could not know what it was but somehow they all blended. The campus was alive with low singing voices. Lingeringly they died away and, still standing there, I knew that hearts were being lifted in grateful prayers. Hark from the shadowy treetops the whip-poor-will. How can we hear one again and not think of good-night time at Silver Bay.”

Postcard photo by Jesse Sumner Wooley; “Now the Day Is Over” and “Savior Breathe an Evening Blessing” are both available on iTunes. 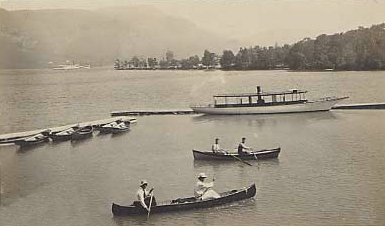 “The booklet sent out by Mr. Silas H. Paine of the Silver Bay Hotel, Silver Bay, N.Y., mentions three unique attractions which ought to make Silver Bay headquarters for the naturalist and collector when in the Lake George region.

“The flora of Lake George: Nature study is becoming very popular. No better place can be found for it than the shores of Lake George. It is wonderfully rich in wild flowers, ferns and mosses. A lady guest of the Silver Bay Hotel arriving on the noon boat found over fifty varieties of wild flowers that afternoon. A large room has been devoted to a collection of the flora of Lake George, not pressed in books in the old fashioned way, but placed in frames like pictures along the walls where they can be easily examined and studied.

“The fauna of Lake George: A whole building is devoted to a rare collection of the birds and animals to be found in this region, nearly 300 specimens, each bird with its nest and eggs and young surrounded by the foliage in which it makes its home, and each animal in the same way in its natural surroundings. This work has been done by a skillful naturalist and is of great interest not only to the student but to all lovers of birds and animals.

“The history of Lake George: There is no spot of equal length in America that has been so many times fought over as the shores of Lake George. The relics of these old wars – arrowheads, spears, tomahawks, cannon balls, bayonets, muskets, and all the paraphernalia of the camp and battlefield — are turned up by the plow or fished up from the bottom of the lake. Two rooms have been devoted to a collection of these historical relics and the portraits of the French, English, Indian and American soldiers who have fought here. With these collections are also gathered the books pertaining to them so that the amateur and the student can find all the helps necessary for their use.”

“This museum comprises a very complete collection of the fauna, flora, geology and history of the Lake George region. All birds and mammals are exhibited in natural surroundings with nests or burrows and eggs or young. This department includes over 300 birds, a few fishes, and all the mammals which now inhabit the locality. In history, there are about 2,000 specimens of firearms, implements, etc., of the old French and Revolutionary wars, and about 1,200 portraits of men and women who participated in the events of those times. There are also 4,000-5,000 prehistoric implements from local sites and a library of about 600 volumes pertaining to the history of the Lake George and Lake Champlain region. This museum is the property of Mr. Silas H. Paine and is open free to the public on week days from 8 to 6.”

— Bulletin of the Buffalo Society of Natural Sciences (1910)

“One of Mrs. Paine’s closest friends in her later years was Edna Hollister, whose husband had died back in 1914 while the family was staying in one of the Paine guesthouses. Edna had known the Paines before her marriage and, as a trained librarian, had helped to catalog Silas Paine’s extensive library in Morse Hall.”

“About fifteen years ago, Mr. Silas H. Paine had a little cobble stone museum on his estate at Silver Bay, N.Y., and in this building was a most complete collection of everything which related to the Champlain Valley: a zoological collection, relics, every book which could be bought which treated of the history of the region, a collection of engravings and prints, and lastly a card index of the soldiers and others whose records Mr. Paine could find who had fought in any of the early wars or had been otherwise identified with the early history of the Champlain Valley. When the YMCA took over most of Mr. Paine’s Silver Bay property, this museum was turned into an administration building and the collection was scattered.”

“The second conference of this summer was held July 21-31 in New York State on Lake George. This is the fourth annual one at this place, surely an ideal place for coming apart to be with God. Nature here is superb. Silver Bay is a cove where the lake is two miles wide and surrounded by hills thickly wooded with white birches, chestnuts and pines. Among these hills tumble brooks fed by springs in the rocks, and beds of fragrant pine needles or moss and ferns run rival attractions with the higher cliffs and broader views of the lake and surrounding mountains.” 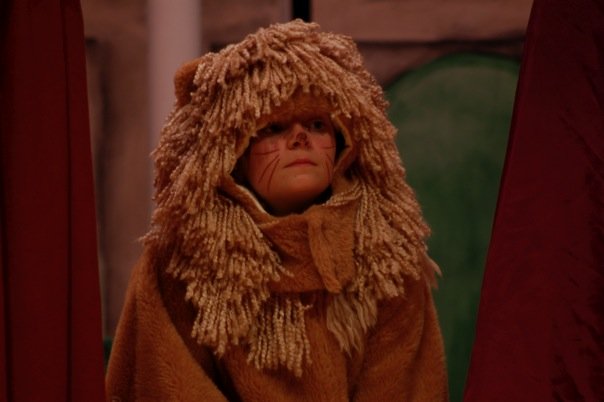 Snug the Joiner playing the Lion in Shakespeare’s “A Midsummer Night’s Dream,” portrayed this past weekend by a lifetime Silver Bay LSC attendee. 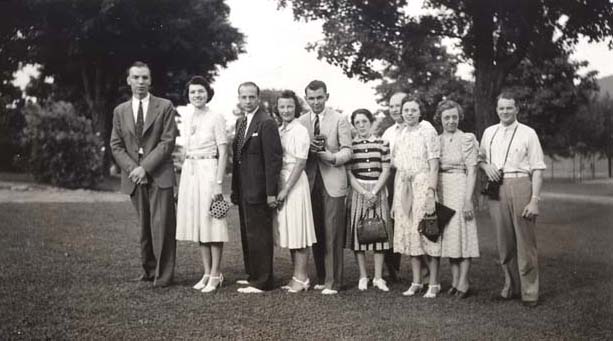 A photo of Luther League members from Schenectady, on July 30, 1939, at Silver Bay, available on eBay. 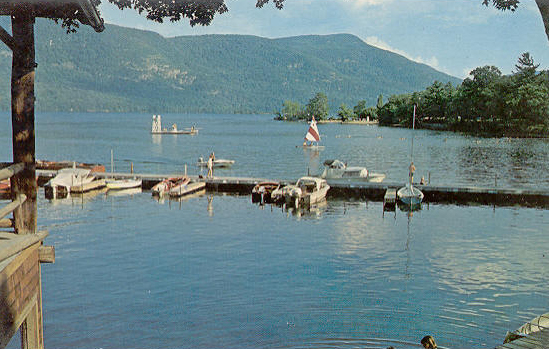 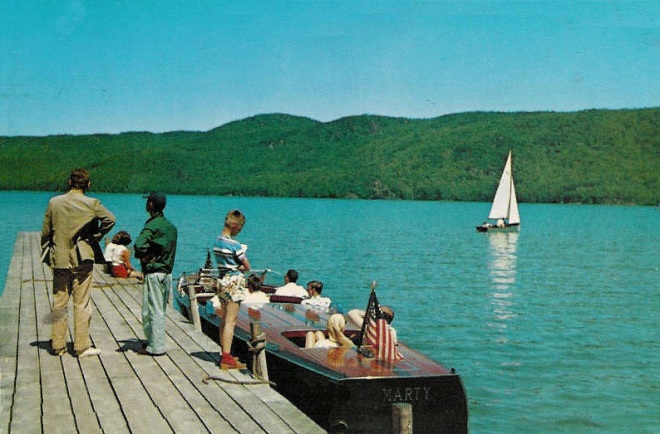 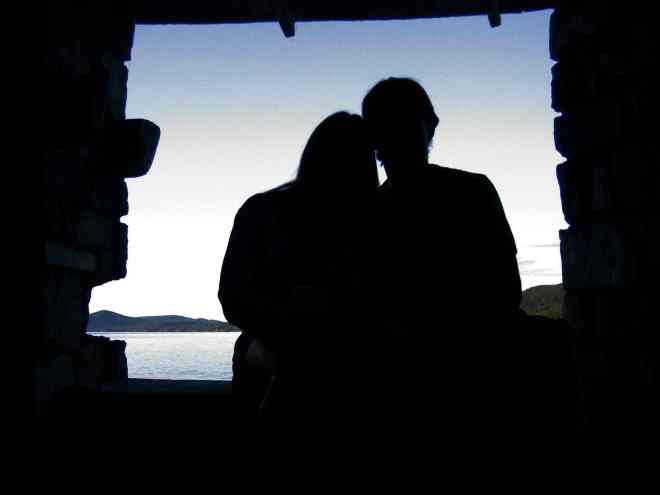 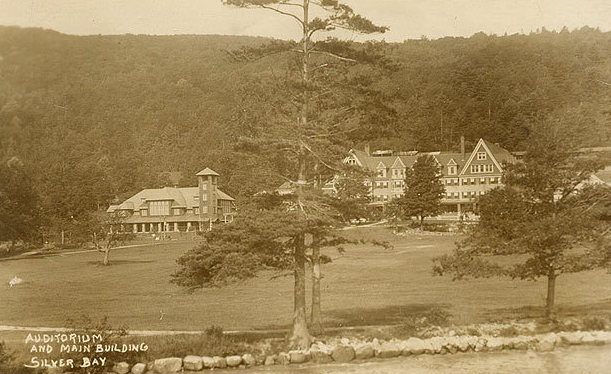